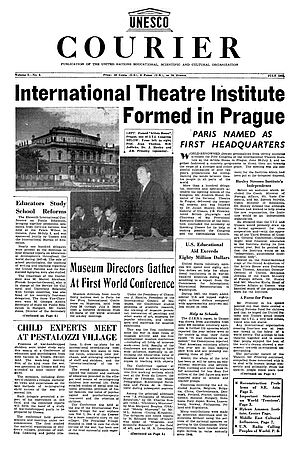 ITI was created on the initiative of the first UNESCO Director General, Sir Julian Huxley, and the playwright and novelist, JB Priestly in 1948, just after the Second World War, and at the beginning of the Cold War, when the Iron Curtain divided the East and the West.

The aim of the founders of ITI was to build an organization that was aligned with UNESCO’s goals on culture, education and the arts, and which would focus its endeavours on improving the status of all members of the performing arts professions.

They envisaged an organization that created platforms for international exchange and for engagement in the education of the performing arts, for beginners and professionals alike, as well as using the performing arts for mutual understanding and peace.

Report of the 1st ITI-World Congress in Prague,1948

ITI has now developed into the world’s largest organization for the performing arts, with more than 90 Centres spread across every continent.

The German ITI center was created 1955. The Federal Rpublic of Germany center  became a member of the ITI 1957. 1991 erfolgte the center merged with the German Democratic Republic center which became a member in 1959. 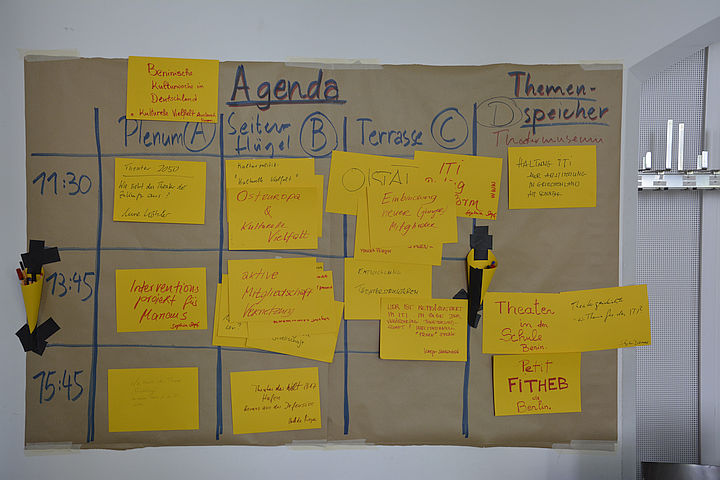 "The ITI’s message of dialogue and understanding through art and culture is needed today as never before." (Kofi Annan, UNO General Secretary in his welcoming address to the 31 ITI-World Congress, Manila/Philippines)

The ITI, a promoter of cultural exchange world-wide, currently is the largest international network for the performing arts. As a non-governmental organisation created by UNESCO in 1948, it has offices in more than 100 countries. Its General Secretariat is based in Shanghai.

The German ITI is represented in the international committees within the ITI network and contributes to the discussion and research concerning aesthetic and social interrelations within the world of theatre. The continuous work of the committees  is organized in the format of workshop, publications, interventions in cultural politics and various other, depending on their respective field of activity (see Charta of the ITI-PDF). ITI Germany hosts presently the secretariat of the ITI Action Committee for Artists Rights (ACAR) and has a cooperation partnership with the Artists at Risk Connection.

The ITI offers advice for German cultural politics as to questions of European and international co-operation in the field of theatre. It continually informs national cultural institutions on developments as regards political, structural or aesthetic aspects of theatre.

As part of the biggest international theatre network the German ITI offers a comprehensive service to the country's theatre people by providing international contacts and in preparing and organising artistic encounters, meetings and workshops in Germany and abroad and a festival in Germany- Theater der Welt - A festival of the ITI.

Two German theatre makers were elected presidents of the ITI worldwide: Ivan Nagel (from 1977 through 1979) and Manfred Beilharz (from 2002 through 2008).

The German ITI is supported by the Minister of State in the Federal Chancellery and Commissioner for Cultural and Media Affairs, the Cultural Foundation of the Federal States and the City of Berlin. ITI Germany submits its annual financial reports to Transparancy International Germany and is also registered at the Transparency Datebase of Berlin (registration number vr_002654).

ITI Germany is a member of the German Cultural Council, the German UNESCO Commission, the National Coalition for Cultural Diversity, the Fonds Darstellende Künste, and the Association of Dramaturgs.

ITI Germany is a member of the following European networks:

The German centre is mandated to send a representative for the ITI world organisation to the UNESCO Intergovernmental Committee for the Diversity of Cultural Expressions.

ITI Germany is a permanent project partner of Stücke festival Muelheim/Ruhr, the Institute for Theatre Studies of Freie Universität Berlin and its International Research Center Interweaving Performance Cultures, and the Center of Competence for Theatre of the Universität Leipzig

Find more information at ITI projects sites (navigate to MORE at the menu).

In the next few years, the German ITI will focus its worldwide activities on Europe and increase its support „for open and democratic structures in a Europe of common cultures“, as the president announced in the context of the 2016 ITI annual assembly „Perspective Post-Europe“. 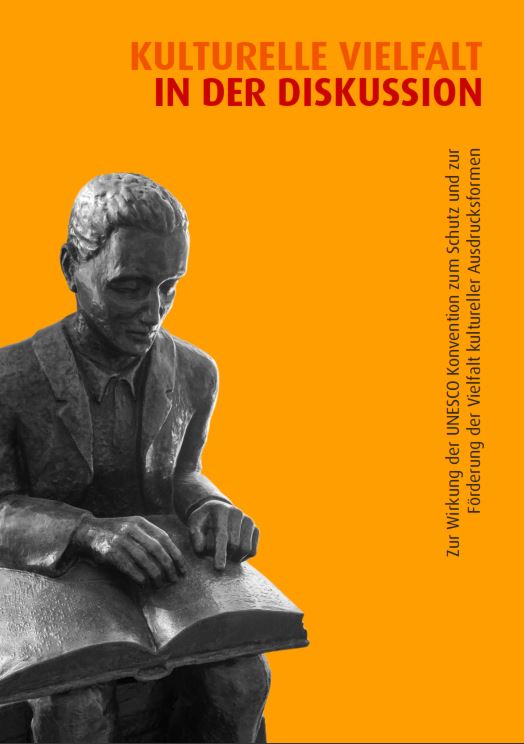 In the pursuit of their main objective - eliminating so-called barriers to trade - the pressure of the World Trade Organization on the nation states has increased immensely within the last fifteen years. This policy aims on erasing the concept of public services, on privatizing public goods. National and local cultural funding policies, the working conditions of theatre people and the future of the theatre system in Germany are directly affected.

The ITI is an international theater NGO with access to the intergovernmental negotiation sessions of UNESCO and represented the interests of the theater in the process of drafting of the Convention on the Protection and Promotion of the Diversity of Cultural Expressions. Since 2004, ITI adopted at all of their world congresses unanimously motions and resolutions on the issue of Diversity of Cultural Expressions (2004, 2014). The German centre is mandated to send a representative for the ITI world organisation to the annual meetings of the UNESCO Intergovernmental Committee for the Diversity of Cultural Expressions. 2017, the recent report und the implementation of the Convention has been published (UNESCO Global Report 2018: Re-Shaping Cultural Policies). With participation of the ITI, for the first time reports and recommendations from Civil Society Organizations have been added. The second CSO report was published 2019.

In 2014, the members of the German Centre adopted a statement against the present EU/US TTIP negotiations and all future trade agreements of this kind.