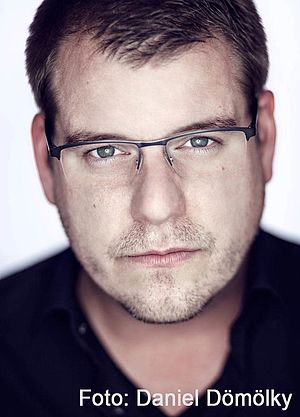 Viktor Bodó, born 1978 in Budapest, was an actor at Árpád Schilling's Krétakör Theatre in Budapest for three years after studying acting and directing. He made his breakthrough as a director through his work as an in-house director at the Katona József Theatre in Budapest, including an adaptation of Kafka's "The Trial". Since 2006 he has worked regularly at the Schauspielhaus Graz, where he first directed Kafka's "Das Schloss" and "Alice" after Lewis Carroll. This work was invited to several guest performances, including the Salzburg Festival 2009 and the radikal jung Festival Munich 2008 and won the Austrian Nestroy Theatre Prize for the best set in 2008.

In 2008, Bodó founded his own theatre company Szputnyik Shipping Company in Budapest, which also cooperated with the Graz Ensemble. His most important productions with Szputnyik in Budapest were "Mietshausgeschichten" and "Der Würfler". With his own troupe he also worked on co-productions at the Schauspiel Köln ("Transit" by István Tasnádi and "Der Mann am Tisch 2" by András Vinnai) as well as at Staatstheater Mainz and Theater Winterthur ("Tot im Orient-Express"). Bodó's Graz production of Handke's "Die Stunde da wir nichts voneinander wußten" (The hour when we knew nothing about each other) from the 2008/09 season was invited to the Berlin Theatertreffen 2010 and was awarded the Golden Mask in Moscow in the category Best Foreign Performance. Viktor Bodó was also nominated for the Austrian Nestroy Theatre Prize 2009 and 2011 in the category Best Director.

In 2014 he was nominated for the theatre prize DER FAUST for his production of Jarry's "King Ubu" at the Theater Heidelberg and in 2016 he was awarded the European Theatre Prize Premio Europa per il Teatro of the European Commission.